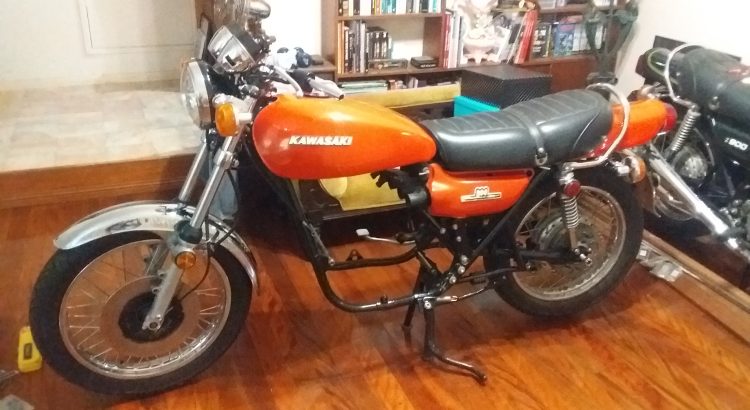 I purchased my 1974 z1a around 2005 or so and was an unregistered rolling framer with drag pipes fitted but no rear shocks. It was someone else’s potential restoration project but they never got off the ground. With it came some spare engine parts which was a nice bonus.

The bike was put into storage for a while, then restoration began, the original goal was to build a custom “Resto Mod” machine, however I eventually decided to return it to factory and began trying to get as many parts restored as possible.

I failed to take any photos of it when I first purchased it, so the picture below is a partial rebuild with many non-standard parts and the body work is as purchased.

The pictures below show the state of the engine from when I originally removed it right up till near final assembly.

One advantage of having the z1a in a in-complete state over the last 15 years has been as a great source of photos for my book “How to Rebuild and Restore Classic Japanese Motorcycles” published in 2015 (and still in print).

I urge you to buy a copy so you get a good grasp of the fundamentals of restoration and motorcycle project maintenance.

The frame is 99% completed back to factory specs and is a roller without the engine.

The Engine is rebuilt but needs a final check over of every fastener and torquing down of each bolt. The shims will need a check and then its just a case of installing into the frame and putting some oil in it.

Cosmetically the z1a needs new paint and a 4-4 exhaust system. Then there are 1 or two minor items to source. The tank and bodywork are original with little in the way of OEM re-manufactured parts.