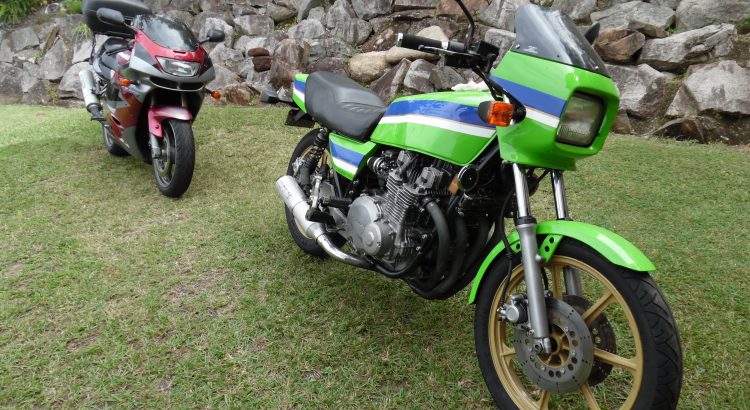 Over the 2021 Christmas break I started to resurrect the GPz1100B2 (which is painted in ELR colours).

The bike started first go which was very positive so I took it for a ride around the block a few times to see what it felt like and to check out the 530 chain conversion I did soon after returning from our 6000klm ride to Tasmania and back (a very popular destination for riders here in Australia).

Unfortunately the tank that is in the picture still had rust in it and it had gotten worse so I decided to replace it.

The original tank had rust in it and this got out of control resulting in me being forced to discard it. I managed to secure another tank from a B1 model that has had the fuel tap moved so it clears the B2 throttle bodies and this just needs a final cleanout in molasses prior to painting. Trying to find a B2 tank was proving to be impossible so I had to improvise with the modified B1 tank.

You obtain Molasses from a rural supply store and the ratio you need to do tanks is 1/L Molasses to 10L of very hot water. So I used a 60L container which fitted the tank nicely. 6L of Molasses and around 55L of hot water seamed to work.

Two weeks after putting it into a 1:10 Molasses/Hot Water mix and the rust is gone and so is most of the crap primer paint. I discovered 3 pinholes which I need to solder up. But its otherwise rust free and ready to start paint prep on. For the time being the tank is filled with old sump oil and I will be stripping and cleaning it shortly so I can fill each hole (new POST for that exercise).

Update Note: I ended up with about 12 holes after removing ALL the plastic filler.

There are two main differences between a B1 tank and the B2 tank that make them unable to be easily swapped over:

The B1 tank needs a round fuel sender while the B2 is rectangular (same as one of the Z1R/z1000J models), the B2 sender is still available and is manufactured as an after market part by Doremi for the z1R, z1000J and a few other lesser know models. Unfortunately you can no longer get the B1 sender.

With the B1 being a Port Injected head, the Throttle Body is considerably smaller so the tap location is right over the #1 Throttle Body.

The B2 has what are known as Throttle Body Injection (TBI) with the Fuel Injectors relocated into the Throttle Bodies which is basically how its been done on cars and bikes for 40 years now, this resulted in no room for the tap and the tap was located forward in the space between the head and the TBI.

What this also means is that the tanks are not a direct swap as the B1 tap is in the wrong location and fowls with the throttle bodies on the B2 and the B2 tap fowls with the Port mounted Injectors.

One of my other side projects is an adapter plate to fit a B2 sender into a B1 tank, so hopefully in 2022 I will get some time to finish it and get a few made. Here is where I am at so far…

While I was disassembling the carbs on the ELR clone, one of the inlet rubber clamps broke, never had that before so I ordered a 4 pack and it arrived during the week. They were so nice and clean it prompted me to get the other metal parts on the carbs powder coated while I had it all apart.

The 34mm CV’s cleaned up very well, very little rust staining in the fuel bowls and nothing in the jets. I wanted to get a few parts professionally powder coated, so I dropped the tops of the CV carbs and the two “L” bracket that hold it all together along with a small bag of other bike parts over at Northside Powder Coating earlier in the morning. No sooner had I typed this paragraph and they called saying they were done, apparently timing is everything and they were setup to spray Satin Black that morning. I went over in the afternoon and took them off the cooling rack myself.

The re-assemble carbs look great and I will sync them over the next few days.

January 2022 – I will start on soldering the holes before the end of January. See this article: GPz1100 Tank conversion & Repairs

More next month on any tuning issues, I just need to check that the carburetors are in sync. The bike is riding nicely and there are no other issues present.

Some links to GPz1100 related posts will appear here as they are written: