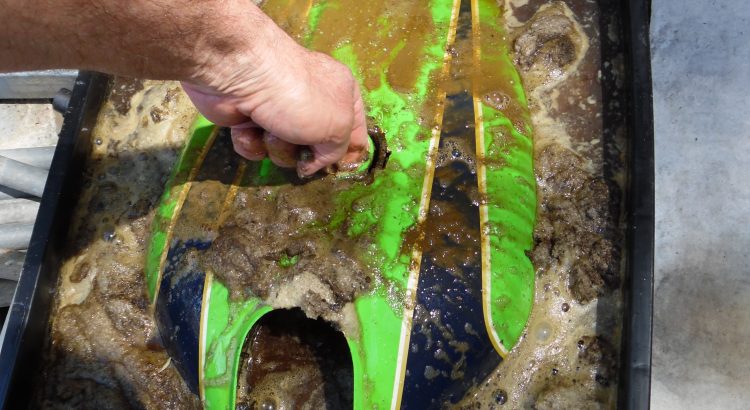 October was a productive month for me, I started with a tried and tested method of rust removal on a tank I recently acquired, stripped and rebuilt the forks on my 1994 zx-9r B1 and picked up the fork lowers for my z900A4 from Specialized Blasting Services.

It started as licorice…

I bought a 1981 GPz1100B1 tank on Facebook, the seller was in Mackay and coming down to Brisbane for business so he brought it down for me to save on postage. The tank had some rust in it and around the filler cap the rust had punctured through. I decided I would clean it up with molasses and strip the tank to bare metal in the process, the etch prime it for the time being.

To start the process I picked up 8 litres of Molasses from a rural supply store, then mixed it with 80 litres of very hot water and put the tank in it.

From previous experimentation, I’ve worked out that 3 weeks is usually long enough to strip all the rust and dislodge any loose paint. After 3 weeks it smells disgusting and looks like a new life form is emerging from the tank….. but its rust free 🙂

Once I removed the tank, I washed it down and started stripping the paint off as well as the plastic filler that was hiding all the dents, and believe me there are heaps of dents and filler in it, but that doesn’t matter at this stage.

After stripping large sections over a four day period working for about 45 minutes at a time, I cleaned and dried the tank with thinners and wax remover and sprayed it with Etch Primer. As I write this I have about 1 more day of work to finish the tank.

The plan for the tank is to get the fuel return hole blocked, the holes on the top brazed and cleaned up and the fuel tap relocated back about 3-4cm to match the B2 tank location. Finally I will get it painted in the ELR scheme and put it on the z1100R clone.

If you have never tackled this job, don’t panic the forks are very easy to disassemble and the seal replacement process is very simple. You actually don’t need any special tools but a 41mm bearing driver will make the process easier.

I will write up a full tutorial later, but you can also find a really good YouTube video on doing the zx-9r fork seals.

I will write this up as a tutorial but the tricky part of the whole exercise is getting the cap back on (until I worked out a simple method).

Once the cap is off, you can drain the oil. The damper rod is secured to the bottom of the lower tube, next you remove the circlip under the dust seal cover and just pull the lower tube from the outer tube. This basically pops the bush out and the fork seal.

And that’s as far as you need to go, oil drained and easy access to the seal.

I will add the remaining photos here, for some reason I don’t have the picture of the seal in-situ handy.