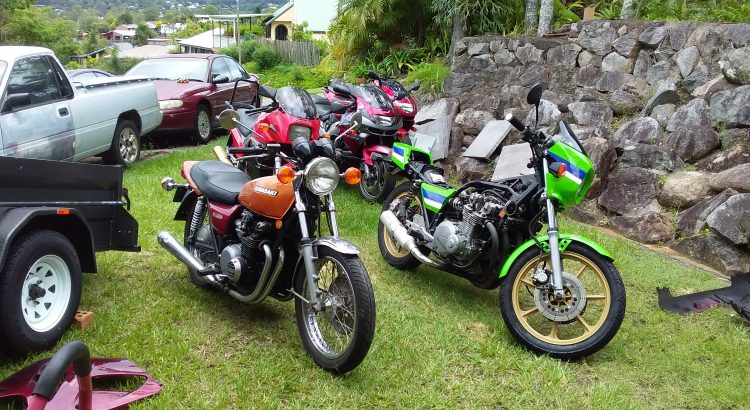 Well another year has drawn to a close and a new one started. This COVID crap has taken its toll on everyone and for the last 2 years a group of us were trying to organize a group ride to the Victoria Alps, which is a 4000klm round trip… border closures, outbreaks and changes in border re-entries as well as differing vaccination requirements has made it impossible to go outside the state and get back in without disruption. That limited us to just riding around the state and 900klm+ rides have been a welcome break.

While that’s prevented some long rides interstate, working on my house has taken all of this year alone and injury after a near fatal 4.5metre fall in 2020 wrote that year off for me as I learnt to walk properly again and recovered from multiple serious injuries.

Having said all that, I was finally getting on top of a lot of bike maintenance and the house renovations are starting to come together nicely when my main daily ride, my zx9r B1 decided to destroy its gear box taking off from a set of lights (gently taking off I might add!). So that bike is parked up for the duration as I struggle to find time to strip it and see just how much damage is in the gear box.

Over the Christmas break I started to resurrect the GPz1100B2 which is painted in ELR colours. First I took it for a ride around the block. The bike started first go which is a very positive and the 530 chain conversion seamed to do the trick so that left a carb tune and cleanup and a tank paint job.

The original tank had rust in it and this got out of control resulting in me being forced to discard it. I managed to secure another tank from a B1 model that has had the tap moved so it clears the B2 throttle bodies and this just needs a final cleanout in molasses prior to painting.

Two weeks after putting it into a 1:10 Molasses/Hot Water mix and the rust is gone and so is most of the crap primer paint. I discovered 3 pinholes which I need to get soldered up. But its otherwise rust free and ready to start paint prep on.

The key issue with the B1 tank is it needs a round fuel sender while the B2 is rectangular (same as the Z1R), unfortunately you can no longer get the B1 sender. What this also means is the tanks are not a direct swap as the tap is in the wrong location and fowls with the throttle bodies on the B2.

One of my other side projects, an adapter plate to fit a B2 sender into a B1 tank, so hopefully in 2022 I will get some time to finish it and get a few made. Here is where I am at so far…

While I was disassembling the carbs on the ELR clone, one of the inlet rubber clamps broke, never had that before so I ordered a 4 pack and it arrived during the week. They were so nice and clean it prompted me to get the other metal parts on the carbs powder coated while I had it all apart.

The 34mm CV’s cleaned up very well, very little rust staining in the fuel bowls and nothing in the jets. I wanted to get a few parts professionally powder coated, so I dropped the tops of the CV carbs and the two “L” bracket that hold it all together along with a small bag of other bike parts over at Northside Powder Coating earlier in the morning. No sooner had I typed this paragraph and they called saying they were done, apparently timing is everything and they were setup to spray Satin Black that morning. I went over in the afternoon and took them off the cooling rack myself.

The re-assemble carbs look great and I will sync them over the next few days.

My other daily ride is a ZX9R-C1, which unfortunately has burned some of the windings in the stator and this also affected the regulator so I’ve order a new Stator, Regulator and gasket. The pictures below shows the basic C1 charging system. If you own the B1 (like me) you will know the B1(right up to the 1997 B4) model has a different system with the Alternator in behind the engine. For the C1 and up to the last model, they basically went back to the same style charging system as the old z1 series.

Other than the charging system, the ZX9R also needs the seals done in the front brakes. I have those and will do them shortly. Hopefully there is nothing else. 🙂

I’ve ordered some parts to complete the front end and am waiting on some free space in the garage to roll it into. As of this moment the z900 is stranded in the Lounge room right in the middle of renovation work and cannot be physically extracted from the room till that is completed!

Hopefully I can get the 1983 GPz1100 back into storage and recoup space.

The work left to do is:

More next month as parts role in and the tank goes out for painting.

This web site is getting a make over! I’ve been rewriting the “Rebuilding Blog” so each bike has its own page with an Overview/History section, Current State and then Reference links to posts and pages that have content about that bike. Over time I will re-write each Post to only feature the particular bike and add additional text and pictures to each posting. if you subscribe, you will get notified (and not spammed).

One of the drivers for this has been the growing content and trying to manage it all. So now when I buy a bike, I can create a section, document the history that I know of and then any content will automatically appear under it!

I will also be able to add more tutorials from the posts, like using Molasses to clean tanks out etc.

Visit the Rebuilding Blog regularly and you should see new content appear.