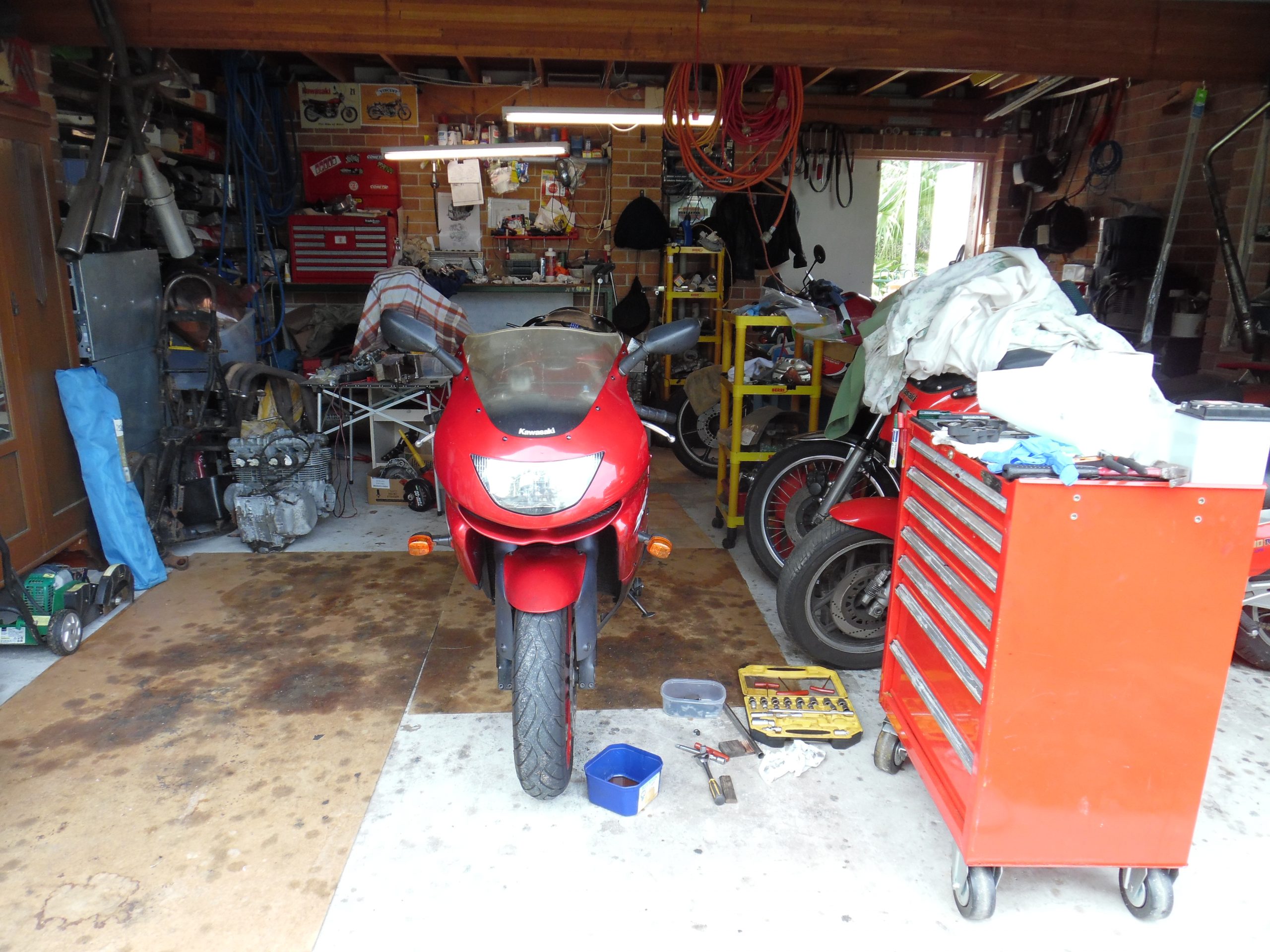 The world is in chaos, Covid-19 is killing sick people left right and centre and almost everyone has been told to self-isolate.

This of course means you can spend some quality time with the one you love (to ride)… your motorcycle(s). In my case I’ve noticed my 1994 zx-9r is leaking oil somewhere near the gear change lever and from both fork seals, while my 1998 ZX-9R C1 bike, the front brakes are binding slightly.

Since its been a while since I did some work on these bikes (see https://sidyoung.com/january-2020/) then its not surprising that something needs attending to. The zx-9r’s get used everyday so the wear and tear is a lot more than my older classics.

With oil leaking out of both seals, I dropped into Rad Hardchroming to get a second opinion. At first glance the guy who owns the business thinks the legs look OK and it most likely the seals (I fitted Pyramid Parts seals), he didn’t like the seals I had chosen so this time I will fit a better brand.

So this month I have two major jobs:

Easter Friday – stuck at home – So with no kids at home and my partner looking after her sick sister it seamed like a good time to attack the brakes!

Thinking it would be a quick job I pulled the left caliper off, dropped out the pads and started to pump the front brakes. To my surprise, only two pistons moved out so a full strip would be required.

If you look carefully you can see a build up of crap at the top of each piston. This tells me that the pistons will need a bit of work.

I used this opportunity to see how bad the other pistons were before I started a full disassembly. Using a block of wood, I cut a section out to make space for a piston to pop out, this gives me a chance to see how bad each one is and the picture below shows the result.

I used the block to pop each piston out and pushed it back in by hand. I’ve only had the bike for about 5 years and not serviced the brakes so stuck pistons are to be expected.

After a short time I had the calipers apart and removed each piston by hand, the right hand calipers were worse than the left, not sure why?

Hint: If you intend to separate the calipers, loosen the 4 retaining bolts before you unbolt the caliper.

It took me most of the day to strip and clean the calipers, there was a lot of build up and I really wanted everything to be as clean as possible. The picture below gives an idea of how much crap had built up compared to one I cleaned.

It took about 4 hours to clean out the caliper bodies and then polish the pistons to a nice smooth finish.

I fitted new seals with a small blob of brake grease, pushed the pistons back in and rotated them as they went in. I also went to the effort of cleaning the threads of the bolts on a wire wheel and reassembled the two halves.

A small amount of lock tight on each bolt and a polish of the head of the bolts finishes off the task. At this time I fitted the pads and slid the calipers back onto the forks.

Once fitted on the forks, connect the brake lines, open one bleed nipple and begin bleeding a caliper, then the other and come back to the first. Bleeding the brakes is a simple task and there were no issues getting fluid in and air out. A speed bleeder might be on the cards for next service!

The only annoying issue of the whole process was fitting the dust seal on the smaller pistons.

Note to self – todo – fork disassembly!

I have parked the bike and am preparing to strip out the forks. I’ve done it three times in six years but never taken photos so this has presented a great opportunity to record how its done on a set of “upside down” forks.

The z650 has a leak in the sump as a pool of oil built under it a couple of days after I assembled it.

The z1a engine is 90% assembled, I will look at what is needed and get busy, and I will document what has been done so I know where I am up to.

GPz1100B2 – needs a new 530 chain. With the lock down and un-essential travel banned, I have not ventured out to a bike shop, however I better do that this weekend and get a chain, after that I need to have another go at the tank.

I have located a spare B2 tank and even managed to get an extra B1 tank as a spare. I’ve asked the seller of the B2 tank to send me some pictures and a price including shipping. Hopefully its both repairable and reasonable to purchase.

In the mean time I need to get some molasses to clean out the existing B2 tank and the newly acquired B1 tank.

More to come….. next month!