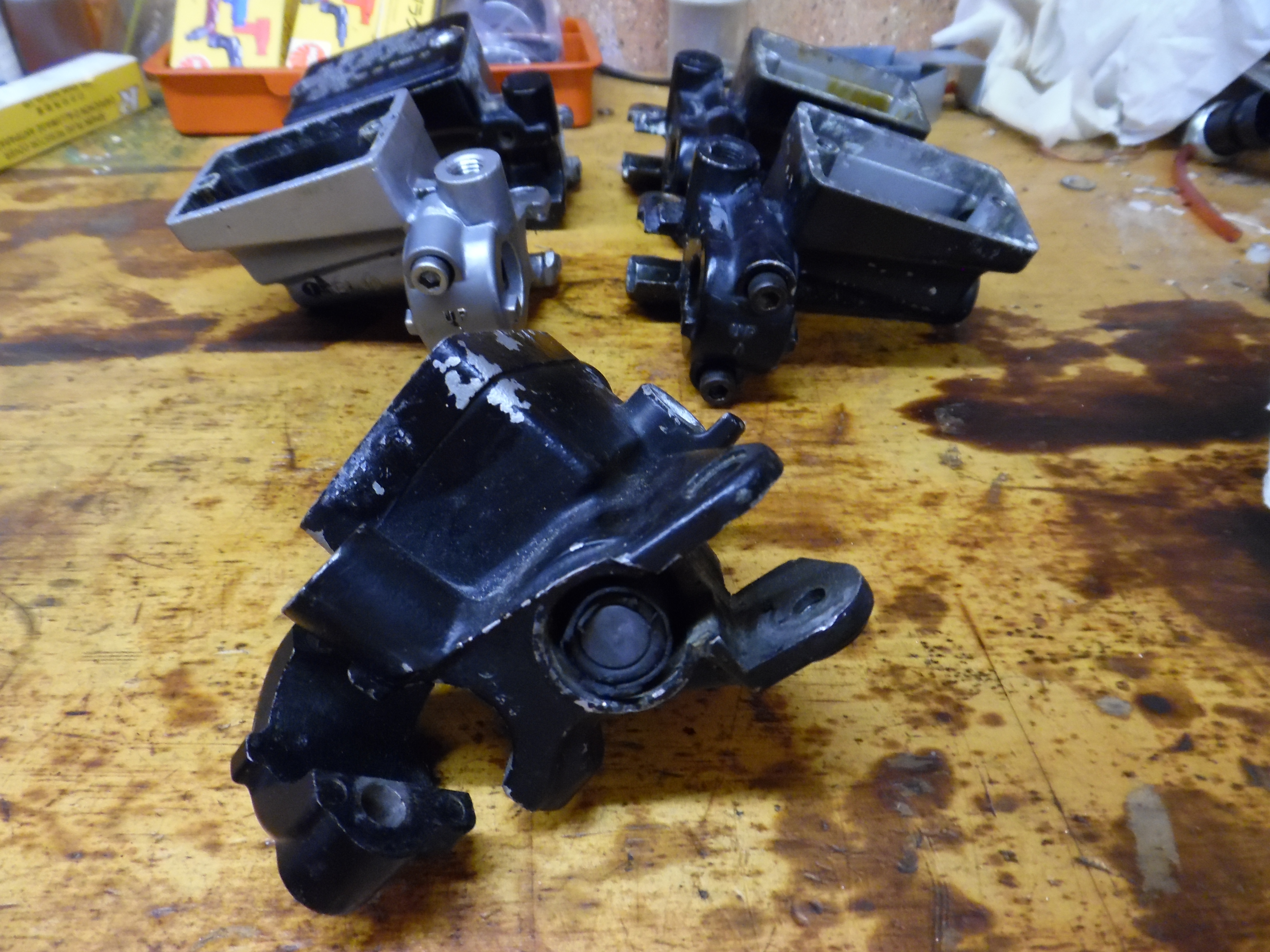 This is my full-proof, gentle and non-destructive way to disassemble a master cylinder (in this case a GPz900R MC). Over time they become seized due to water absorption and oxidation issues.

For a project bike I needed a Clutch and Front Brake master cylinder, I have collected a few over the years and they always come in handy. This one is old and tired and before it can be stripped and re-coated, the internals need to come out.

From this end you can see the dust seal is rooted, so the inside will be no good either.

Use a needle like tool to pry out the dust boot so we can get to the circlip under it.

Once its out, it should look something like this:

Apply heat into the banjo bolt hole, a minute or two at a time.

Now heat the body near the opening (where the boot came out), again a minute or two at a time should be enough.

Now heat the piston itself, I’ve mounted it in a vice because our next step (not shown) is to tap it with a drift and hammer to loosen it, a few tapes and maybe a little more heat.

Remove the heat and you should see the circlip down inside. You should also be able to push the piston in with a rod and if its spring loaded it should pop right back, stopping on the circlip.Using a strong needle like tool or pick and have a small screw driver handy, dig into one of the circlip holes and rotate it around a few times, push down on the piston and then lever out the circlip. The piston should pop up.

If the piston is stuck after you remove the circlip then get a good strong set of long nose pliers, grab the shaft of the piston and reef HARD pulling it up and out, I did 5 in a row and they came out first go.

If the spring and suction cup are stuck, stick a small blade screw driver into the banjo bolt hole and push the spring, it will come out (along with rust!). You can also use an air gun and watch it fly across the garage. Its rooted so don’t feel guilty if you loose it somewhere.

This is the order the parts are seated inside the master cylinder.

At first glance the left and right M/C’s look mirror image, and I thought the same piston kit would be OK, however as I pulled a few apart it became apparent there is a difference. The Brake piston is larger in order to push two caliper pistons while the Clutch piston is smaller as it only needs to push a small slave cylinder.

Another difference is the ends of the pistons are different, the Clutch piston has an indentation while the brake is flat.

A good trap for new players!

The key thing after you have pulled these apart is to meticulously clean everything so a new kit goes into a clean housing.